ICC World Cup 2019 is the 12th World Cup that is about to start on 30 May and will be continued till the end of June. Earlier in 2011 and 2015, the World Cup was played among the 11 teams. But this year, the number of teams are reduced to 10. Each team will be playing nine once with other teams. At the end, we will be left with four team who will be playing the semi final match. And then the final two team will be playing against each other to be the winner of this tournament. 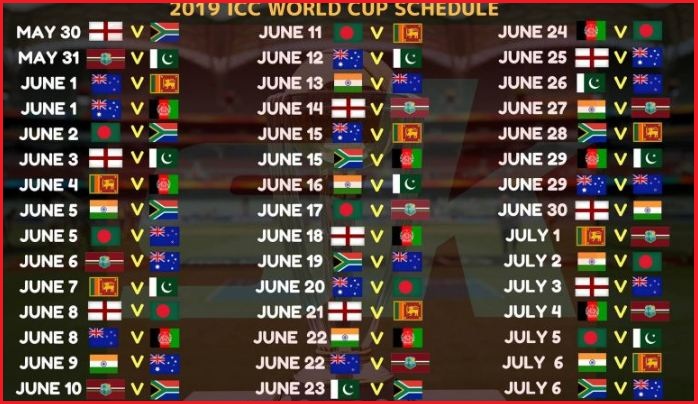 This the there will be two additional team of countries Ireland and Afghanistan who are qualified for the World cup 2019 in June 2017. They will be seen in the World Cup tournament for the first time. Due to the Pulwama attack, many of the former Indian players and Board of Control for Cricket in India (BCCI) have claimed to ban the team Pakistan from playing the World Cup 2019. But, a press meeting was held in the International Cricket Council (ICC) after which it is decided that Pakistan team is allowed to play the tournament and will not be banned due to the cause of conflicts between two countries. It is decided that the match will be held according to the planning done.

Also Read: Mission Shakti: Launched by India as a threat message to China

On 26 April 2018, the fixture list of the World Cup 2019 has been released after the meeting conducted by International Cricket Council (ICC) in Kolkata. Due to some complains about the peach, London Stadium will not be considered this year for the venue of the tournament. The teams have submitted the names of the players of their respective squads by 23 April 2019. Initially, 45 matches will be played in total which will finally lead to the semi final and final teams. This year, the opening of the tournament will be done by the team England and South Africa who were the finalists in the World cup of year 2015.